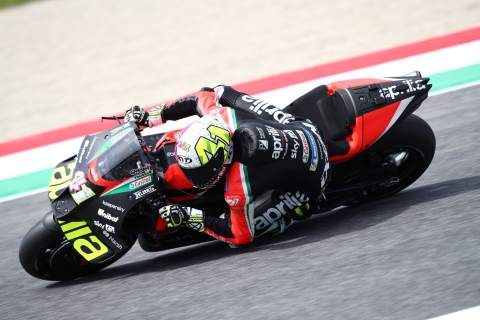 With Gresini now close to choosing Ducati machinery rather than continuing with Aprilia next season, the Noale factory’s MotoGP presence – like Suzuki – looks destined to remain at just two bikes on the grid for 2022.It’s a disappointing situation for Aleix Espargaro, who is carrying the Aprilia challenge this year on a vastly improved RS-GP that has finished closer than ever to the front.”I have two emotions,” Espargaro said of Aprilia staying at only two machines. “From one side I am angry because it will be more difficult for me, as I have to be the fast man and develop the new parts, many more tests, but that’s also a challenge for me which is not that bad.”From the other hand I’m a little bit sad. I feel that this project is my project, I feel like Aprilia inside my head.”So I was very happy with the possibility to have like a Junior [satellite] team, to see more Aprilias on track with young riders, but at the end it doesn’t look like it will be next year.”The only thing I can do is try to make one step more with the development of the bike to see in the future if somebody wants our bikes.Related ArticlesaccImages.createImage(); Alex Rins heads for surgery after bicycle accident, out of Catalunya MotoGPaccImages.createImage(); Maverick Vinales splits from crew chief Garcia, Galbusera returns”I’ve proved this year that we have a strong bike, it’s true that it’s not a winning bike yet, but we are on the way and believe me in the future we will see more Aprilias on track.”Having just two RS-GPs on the grid also means the choice of Espargaro’s 2022 team-mate becomes trickier, with a young signing needing to help out with significant development.Aprilia’s ideal 2022 scenario seemed to be a satellite Gresini team to prepare young Moto2 stars such as Fabio di Giannantonio (already contracted to Gresini) and Joe Roberts, while signing Andrea Dovizioso alongside Espargaro in a strong Factory line-up.Related ArticlesaccImages.createImage(); Johann Zarco, Jorge Martin stay at Pramac Ducati for 2022accImages.createImage(); Miller: 8 Ducatis on MotoGP grid ‘would be fantastic’But ‘while the door is still open’ for triple title runner-up Dovizioso, who has agreed to further tests with Aprilia this year, he currently doesn’t seem too interested in a full-time 2022 race return.”Regarding my team-mate, I don’t understand why Andrea doesn’t want to race. I mean it’s not decided yet. When I talked with Massimo [Rivola], still nothing is decided, so the door is still open for Andrea to join me next year, I think,” said Espargaro.”He will be more than welcome and I said many times it will be great to have him onboard as he’s a very good rider and if I’m able to beat him on track my credit will be higher. Because as I’ve said many times Dovi has been, apart from Marc, the best rider in the field for several years.””4If Dovizioso declines the Aprilia seat for the second year in succession, Espargaro feels Aprilia might need to go in search of another rider with proven MotoGP speed and experience.”It’s important for every single factory to have a strong pair of riders and if you just have a factory team, like Aprilia and Suzuki, it’s even more important,” said Espargaro, currently teamed with rookie Lorenzo Savadori after multiple riders joined Dovizioso in turning down the 2021 race seat.”For example, Suzuki have a really strong pair of riders. Both have a similar speed. It’s true that at the moment Joan has more points than Rins, but the level of both riders is very similar, both are very fast and I think this is very important to develop the bike.”5″Lorenzo [Savadori] on the other side of the garage doesn’t have much experience so he’s trying to understand the bike, actually he’s growing and he’s improving, but if you want to arrive to the top you need a very fast couple of riders.”It’s not enough with one. I do everything I can, I try many pieces in every Grand Prix, every time something new arrives I try to put on the plan of the weekend. But it’s not easy to develop a bike while you are racing.”So if you have another team-mate that is strong, or satellite bikes or test team it’s always more easy.”After a seventh place, five-seconds from the podium, last Sunday at Mugello, Espargaro continues his rostrum quest in his home round at Catalunya this weekend.”6″It looks like the weather won’t be easy, so we have to understand when it’s going to dry or wet. I could be a wet race. But my objective is just the same as the last rounds, to fight for podium,” he said.”In the first races I always finished 6-7-8 seconds from the winner, so it’s very close. In other years it would be enough to finish a couple of times on the podium! But this year everything is very tight.”7″So I will try to do one step more in my home GP to see if I can be closer or why not fight for the podium.”Espargaro, who is seventh in the world championship, has matched the RS-GP’s best race result of sixth place twice so far this season.Meanwhile, Gresini could be one of four Ducati teams next year with the Official team and Pramac confirmed (on the latest GP22s) and VR46 also rumoured to be close to a Desmosedici deal.”8