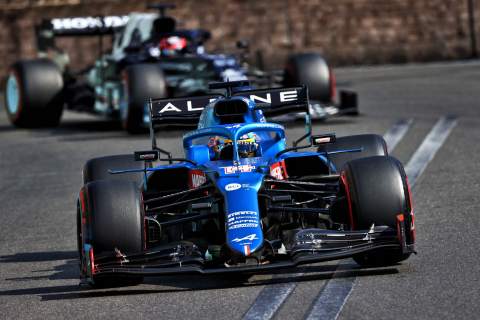 Alonso sat tenth on the grid when the race resumed following Max Verstappen’s high-speed down the start-finish straight.The Alpine driver moved up to sixth on the restart which included a stunning overtake around the outside of Yuki Tsunoda at Turn 5.He told his engineer ahead of the restart on Lap 51: “Yes, we go all or nothing”.Reflecting on his race in Baku, Alonso felt tenth place alone wasn’t a just reward for Alpine.“We have good pace in a two-lap race,” Alonso said after the race. “That was fun. It was exciting to have some battles. Everyone was aggressive knowing it was only two laps and you don’t need to take care of the tyres.“It was fun. I think we had a solid weekend here in Baku. Being 10th, it was too little reward for the team. I’m happy with sixth. The guys deserve it, we’ve been working very hard. At least we get some good points.”The Spaniard lacked pace throughout the race, dropping to 13th at the midway point having started from eighth.Related ArticlesaccImages.createImage(); Tost hails “super talent” Tsunoda after ‘most complete’ F1 weekendaccImages.createImage(); Horner: Perez “ahead of expectations” after first F1 win for Red Bull in Baku“Yeah, a little bit [surprised by the lack of pace],” Alonso added. “The FP2 long run felt OK, but early in the race, we were three or four tenths slower than the people around. We tried to be creative with the strategy, trying to undercut people around, and then taking the first Safety Car, and gambling to put the soft tyre, but any strategy when you’re a bit slow in pace, it doesn’t work.“We got lucky in the end to get an opportunity – and we took it.”