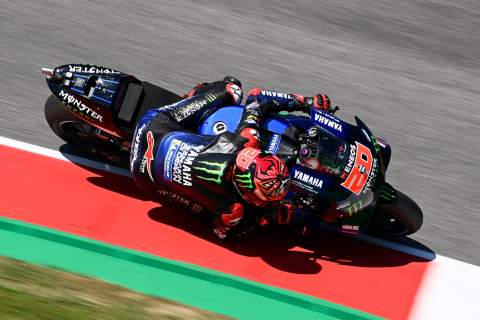 Live updates from Friday’s pair of MotoGP free practice sessions at Barcelona!CLICK HERE to view on … After last weekend’s tragic Mugello round, MotoGP moves straight to Barcelona for round seven of this year’s world championship.Fabio Quartararo arrives with a 24-point lead over countryman Johann Zarco (Pramac Ducati) after victory in Italy and will be out to repeat last year’s Catalunya triumph, when he clung on in the face of a late charge by the Suzukis of Joan Mir and Alex Rins.But Rins, enduring a miserable run of four falls in the last four races, won’t even be on track this weekend after fracturing his wrist in a bicycle training accident at the track.Francesco Bagnaia mistake while leading in Mugello means he has slipped to third in the standings, just ahead of factory Ducati team-mate Jack Miller, with reigning champion Mir and Quartararo’s team-mate Maverick Vinales now 40 and 41 points from the top. In an unexpected move, Vinales has split from crew chief Esteban Garcia following Mugello and will work with Valentino Rossi’s former chief mechanic Silvano Galbusera from this weekend.Mir took his second podium of the season at Mugello but needs race wins sooner rather than later to reel in Quartararo. Miguel Oliveira arrives on a high after handing KTM its first rostrum of the season last Sunday, when team-mate Brad Binder also confirmed a promising debut for a revised RC16 chassis with fifth place.Related ArticlesaccImages.createImage(); Vinales ‘didn’t ask’ for crew chief change, trusts YamahaaccImages.createImage(); Petrucci: Gardner deal ‘well deserved’, KTM my only targetMeanwhile, Valentino Rossi hasn’t been seen at the front of a MotoGP race since last September’s Catalan round, where he was catching Quartararo until ing out.With only a tenth place to show for the season so far and time running out before a decision on his racing future, could Barcelona – scene of some of Rossi’s most famous wins – yet provide the boost needed to extend The Doctor’s legendary career?Turn 10 has been redesigned in time for this year’s MotoGP event, with the sharp ‘F1 corner’ at the end of the back straight replaced by a more flowing layout similar to the original Turn 12, used until 2016.Related ArticlesaccImages.createImage(); Alex Rins heads for surgery after bicycle accident, out of Catalunya MotoGPaccImages.createImage(); Aleix ‘sad’ at no satellite Aprilias, ‘door still open’ for DoviRookie Jorge Martin is back this weekend after missing the last three rounds due to multiple fractures in Portimao, while Marc Marquez is taking part in his fifth event since returning to MotoGP action, but continues to struggle with his right arm and shoulder.There is a threat of rain throughout the weekend…