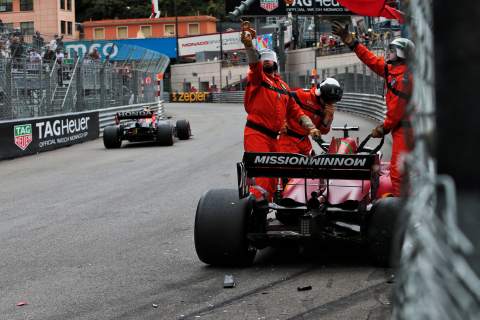 Qualifying for the Monaco Grand Prix was disrupted and ended early by Charles Leclerc’s on his final lap as he secured a shock a shock pole position for Ferrari.The incident prevented several drivers, including Red Bull’s Max Verstappen – who had been up on Leclerc’s sector one time – from improving on their final flying laps in Q3.It led to suggestions in the paddock that F1 should implement a rule used in American series IndyCar and IMSA where drivers who bring out red flags have their lap times deleted so they cannot unfairly disadvantage their fellow competitors.Leclerc’s closest rivals in qualifying insisted it was fair for the Monegasque to keep his pole, despite their respective frustration at missing out.F1 race director Michael Masi confirmed after Sunday’s race that the FIA will explore whether an IndyCar-style rule could be a suitable option to introduce to the world championship.“Like everything when everything arises, the FIA, Formula 1 and the teams look at everything and consider it on its merits,” Masi said.Related ArticlesaccImages.createImage(); Williams prepared to give Russell multi-year F1 contract he cravesaccImages.createImage(); ‘Special’ driving style needed for McLaren F1 car “not natural” for Ricciardo“Yes, I know the IndyCar rule, which is also a rule in a number of other FIA international series and domestic championships around the world.“We’ll look at it and, together with all of the key stakeholders, determine if it’s suitable or not.”Masi also revealed that race control looked into Leclerc’s qualifying to ensure there was no foul play involved but quickly concluded it was not deliberate.Related ArticlesaccImages.createImage(); Mercedes may protest Red Bull over F1’s flexi-wing saga at BakuaccImages.createImage(); 10 things we learned from the Monaco GP as Verstappen lands F1 title blow“The incident was looked at immediately in race control,” Masi explained. “It was quite clear to us that it was an error at the first part at Turn 15.“So having looked at it, looked at the data, and also listened to the team communication, I don’t think any driver would go out there to severely damage their car to that degree in any circumstances because of the consequences that may arise out of that.”