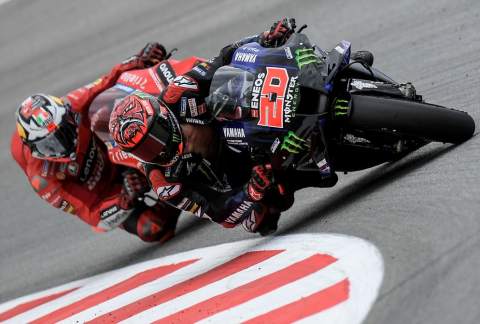 Fabio Quartararo: I should have been black-flagged

Having had time to reflect on the pair of penalties he received after Sunday’s Catalunya MotoGP race, world championship leader Fabio Quartararo admits he should have been black-flagged for riding with his leathers open.However, the Yamaha star still feels the other 3-second penalty, for failing to lose more than one-second when he straight-lined Turn 2, was unfair.”I think looking back at what happened… It’s difficult to admit, but for me it was a black flag,” Quartararo said after Monday’s post-race test at the same Barcelona circuit.”It’s true that I put myself in danger, and also with what happened last week [to Jason Dupasquier], that [black flag] would have been the correct thing.”The only penalty I don’t agree with is the short cut, because I don’t feel it’s fair. I lost seven tenths, but if I lost one second, the penalty was gone. And how can I know on the bike that I lost seven tenths and not one second?”So that was a little bit stupid. But I admit the second penalty [leathers]. I was angry of course, but I mean, better this than zero points.”Related ArticlesaccImages.createImage(); 2021 Catalunya MotoGP Test, Barcelona – Lap Times (FINAL)accImages.createImage(); 2021 Catalunya MotoGP Test, Barcelona – Lap Times (4:30pm)Quartararo was forced to cut Turn 2 after losing the front of his Yamaha as he pitched into the first corner on lap 22 of 24, moments after losing second place to Johann Zarco.Meanwhile the zip on the front of Quartararo’s leathers had come undone, for unknown reasons, through the same Turn 1-3 area on the previous lap.After reaching into his leathers and discarding his chest protector, the Frenchman rode the rest of the race bare-chested, with obvious safety implications should he fall and slide on his stomach.Related ArticlesaccImages.createImage(); 2021 Catalunya MotoGP Test, Barcelona – Lap Times (3:30pm)accImages.createImage(); 2021 Catalunya MotoGP Test, Barcelona – Lap Times (2:30pm)The MotoGP rules state that safety equipment, which specifically includes leathers and chest protector, “must be worn, correctly fastened, at all times during on-track activity.”Yet, for reasons that remain unclear, Quartararo was not black-flagged and instead allowed to finish the race, in third place. The penalty for cutting Turn 2 then dropped him to fourth, behind Jack Miller.Later that evening, a further 3-second penalty was applied for ‘riding without his leather suit correctly fastened and without the required chest protector’. That demoted Quartararo to sixth.”4Extraordinary scenes in the closing stages involving @FabioQ20!For riding without his chest protector and his leather suit correctly fastened, the Frenchman received a 3-second penalty#CatalanGP 9EBy6hVSjNMotoGP (@MotoGP) June 6, 2021Quartararo initially criticised the decision on social media, saying he had not put anyone else in danger. However, upon reflection, “we are going in the right way. For safety, more is better.”But he continued to fight his ‘corner’ when it came to the short-cut penalty and indeed other recent track-limit punishments handed out to other riders.”5″Now we are getting into some things that I really don’t like, like Miguel and Mir in Mugello on the last lap, they were out of track limits, but let’s say it’s not [really] track limits which are outside of the kerb, they were at the end of the kerb. Same with Joe Roberts. It’s not giving any gain.”The shortcut, I didn’t go straight because I wanted to go straight, I lost the front and nearly ed, and I went straight. If there was gravel there, I would go in the gravel.”You get a 3 second penalty for a short cut but the short cut was slower than normal, so it was not a short cut.”For me, the rules are getting every time more and more strict, and we can’t be always really precise, we can make mistakes. And I think it’s taking out the fun side of the show. We are not robots.”6″So I think a little bit of mistakes should be allowed by the rider, and more when you need to make 24 laps on the limit.”Quartararo was speaking after finishing second fastest to team-mate Maverick Vinales in Monday’s test.”7″We tried some new settings, electronics, and I wanted to try a few things for my riding style today, looking at some points where Miguel [Oliveira] was much stronger than me,” he said of his day.”So what I wanted to try was more about riding style than other things. But we tried some interesting settings, that we need to confirm. But quite a positive test and a few practice starts at the end. We are still in a good way.”Quartararo now holds a reduced 14-point lead over Zarco heading into round eight at the Sachsenring next weekend.”8