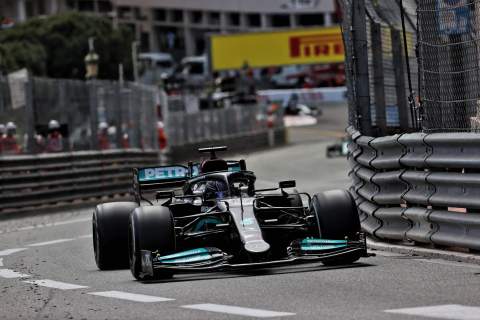 Hamilton endured one of his most difficult weekends as a Mercedes driver around the streets of Monte Carlo.The seven-time champion qualified and finished in seventh place, while main title rival Verstappen dominated the race to win in the principality.Setup issues in qualifying were compounded by Mercedes’ poor strategy call to bring Hamilton in on Lap 29 – the first of the leading group.The Mercedes driver was overcut by Pierre Gasly, Sebastian Vettel and then Sergio Perez, ensuring he couldn’t benefit from Charles Leclerc’s non-start and teammate Valtteri Bottas’ botched pit stop, which forced him out of the race.“We lost a lot of points today for a really, really poor performance from the team,” Hamilton said. “I’m definitely a little bit surprised by it, but these things are sent to try us.“Three places it cost us [the strategy]. I don’t really have a reaction to it. I think we do all our talking in the background and we’ll work together and try and come out of this stronger. We underperformed as a team all weekend from the get-go so we’ll just put our focus onto the next race.”Related ArticlesaccImages.createImage(); ‘I thought we would end up in the harbour’ – Gasly on Vettel Monaco GP battleaccImages.createImage(); ‘I thought we would end up in the harbour’ – Gasly on Vettel Monaco GP battleHaving been critical of the Monaco layout ahead of the weekend, Hamilton again described the race as “dull”.“Dull,” Hamilton added. “But Monaco really always is, no matter what position I’m in if I’m really honest, it’s not a fun race because you’re just following people, you can’t overtake them.“So even when you’re in the lead, honestly I’ve sat in the lead and of course it’s a great feeling to win, but the race is actually really, really boring and you’re just doing the same thing 78 times.”Related ArticlesaccImages.createImage(); Norris was “pretty worried” he’d lose Monaco F1 podium to PerezaccImages.createImage(); Norris was “pretty worried” he’d lose Monaco F1 podium to Perez