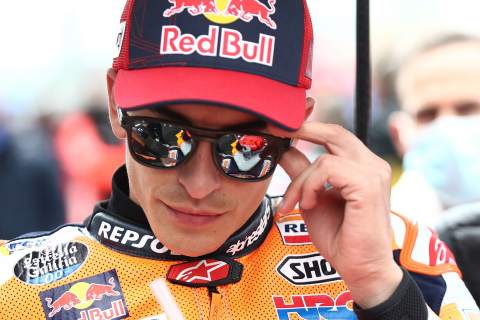 Marc Marquez: It will not be the easiest of weekends

Still far from 100 percent fit, Marc Marquez now faces the first back-to-back MotoGP events since his return from a nine-month layoff due to complications from a broken right arm.Marquez’s physical condition means his aggressive elbow-saving style has been put on hold, but the eight-time world champion capitalised on mixed weather at Le Mans to lead a MotoGP race for the first time since last July’s injury.Unfortunately for the Spaniard he would leave France rueing a missed opportunity after falling from the lead, then again while recovering though the field as the fastest rider on track.The #93 now returns to the scene of his very first grand prix victory, at Mugello in the 125cc class in 2010, where he currently holds both the MotoGP pole and race lap records.The Repsol Honda star split the Ducatis of Danilo Petrucci and Andrea Dovizioso for second place in a thrilling 2019 showdown the last time MotoGP visited the circuit, while just five days after this Sunday’s race Marquez will be back on track for opening practice at his home Catalunya round.“I have had a good week to continue with the recovery process,” said Marquez, who has a best race result of seventh in the three rounds since his return and is currently 64 points from title leader Fabio Quartararo.Related ArticlesaccImages.createImage(); Morbidelli: Wonderful to race at Mugello, but it won’t be a normal oneaccImages.createImage(); Morbidelli: Wonderful to race at Mugello, but it won’t be a normal one”We showed our potential in the wet in France and this weekend in Mugello we have to work well from Friday morning to try to be consistent and find good pace.”I understand my physical limitations and know that it will not be the easiest of weekends to be close to the front in the dry.”Now we arrive at two back-to-back races, which is a first for me this year. It will be more physically demanding, but we can manage it,” he insisted, having previously abandoned the Jerez Test due to physical fatigue from the race weekend.Related ArticlesaccImages.createImage(); MotoGP podcast with Keith Huewen: Dovi-Aprilia, Magic Mugello & moreaccImages.createImage(); Jack Miller stays with Ducati for 2022 MotoGP seasonJoining Marquez on the 2010 125cc Mugello podium was new MotoGP team-mate Pol Espargaro, who finished just 0.116s behind for third place.Espargaro took eighth last time out at Le Mans, matching his best of the season, but has much higher goals in his debut year at Repsol Honda.“After not visiting the track in 2020 it will be nice to return to Mugello this year, riding a MotoGP bike down the straight there is something really unique,” Espargaro said.”4″We will have to see how our bike is behaving there as it’s a very different circuit to where we have been. There will be a lot of competition this weekend, but if we work well throughout practice, I think we can be there and fighting.”Then we have another race in Barcelona straight after, it’s going to be an exciting couple of weeks.”