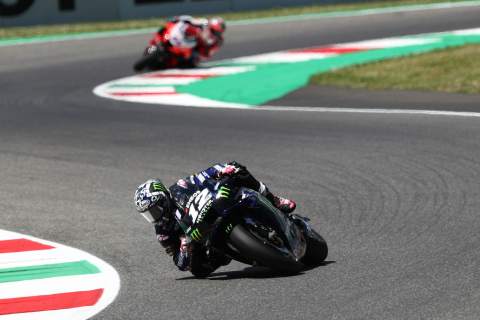 Maverick Vinales: Mugello ‘a weekend to forget’, lost the ‘feeling’

Maverick Vinales recovered from a disappointing MotoGP qualifying to finish eighth in Mugello, but it was another weekend where the Spaniard was outperformed by team-mate Fabio Quartararo. Vinales started 13th after a controversial qualifying session in which Marc Marquez followed Vinales for all but the Yamaha rider’s final qualifying attempt. Marquez took full advantage of Vinales’ speed by getting a tow on both runs which led to the Honda rider advancing and Vinales ultimately missing out. While eighth was a decent result given Saturday’s qualifying, the 26 year-old called it ‘a weekend to forget’, not least with Quartararo taking a third win of 2021 which can’t have helped matters. Vinales is already 41 points down on the Frenchman heading into Catalunya where Quartararo won last year. “The Italian GP was a weekend to forget for us, for various reasons. My thoughts are still with Jason‘s friends, family, and team, but we also need to make some serious steps this weekend,” said: Vinales. Related ArticlesaccImages.createImage(); Vinales, Miller on track limits: Joe Roberts did nothing wrongaccImages.createImage(); 2021 Italian MotoGP, Mugello – Race Day Updates LIVE!”We will keep working on understanding what does and doesn‘t work for us and why. It has happened a few times already that I am fast during the practice session, but then suddenly I lose that feeling with the bike later in the weekend. “We need to improve on finding a good set-up in just the first two 45-minute FP sessions. For sure, we will be pushing again here this weekend.”Vinales’ troubles of being quick during practice but losing ‘that feeling’ as the weekend progresses, is somewhat an example of what happened during last year’s Catalan GP, as he was second quickest in practice, fifth in qualifying, before finishing ninth in the race.Related ArticlesaccImages.createImage(); Marc Marquez: I apologised to Vinales, but it’s within the rulesaccImages.createImage(); 2021 Italian MotoGP, Mugello – Qualifying (1) Results