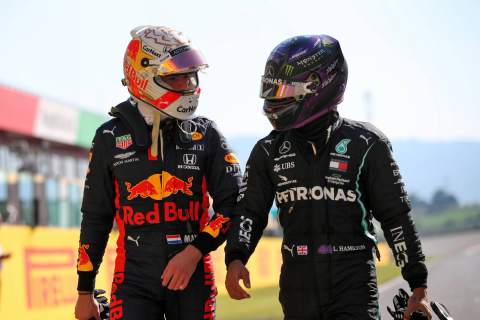 Max Verstappen has dismissed the suggestion of Lewis Hamilton joining him at Red Bull because he cannot see why the Mercedes driver would want to switch Formula 1 teams.Check out the F1 YouTube channel – CLICK HEREAhead of this weekend’s Russian Grand Prix, ex-F1 team boss Eddie Jordan said that Hamilton should consider quitting Mercedes to form a ‘super team’ with Verstappen at Red Bull once his contract expires at the end of the year.Jordan reckons Hamilton going heto-head against Verstappen at Red Bull would be a far more exciting prospect for F1, rather than Hamilton opting to remain at Mercedes as is widely expected.But Verstappen brushed off the notion of Hamilton joining him at Red Bull, adding that the reigning world champion is currently at the right team to win world titles and has no reason to leave.cnxps.cmd.push(function () { cnxps({ playerId: “004d570a-7977-45f7-bc0c-a349bf945b15” }).render(“5a36b5247b9f4bf5b8815714b45226d6Asked what he thought of the idea, Verstappen replied: “The only thing I’m interested in is winning the championship.“Why would he do that? He also wants to win the championship, I want to win the championship.”He tried to of course be at the right team; and at the moment he’s at the right team to win the championship. But, yeah, let’s see what happens.”Hamilton has the opportunity to draw level with Michael Schumacher’s all-time record of 91 career victories in F1 if he wins for the fifth time at Sochi on Sunday.The Briton already holds a 55-point advantage over Mercedes teammate Valtteri Bottas in the championship having won six of the opening nine rounds of the campaign and remains on course to equal Schumacher’s tally of seven world titles this year.