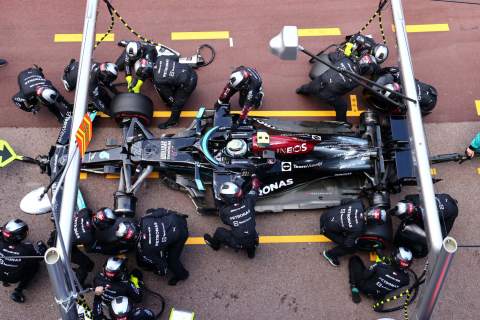 Bottas’ hopes of taking the fight to Red Bull’s Max Verstappen for the win in Sunday’s Monaco Grand Prix were ended by a disastrous pit stop on lap 30.In the unusual incident, Mercedes’ pit crew were unable to get Bottas’ front-right tyre off, leaving the team no option but to retire his car.Mercedes boss Toto Wolff refused to blame the wheel gun operator for the botched stop and said “there are always many factors that contribute to such a catastrophic failure.” While the team has suffered delays from similar pitstop problems in the past, never before has it culminated in a DNF.“We call it machining of the nut,” Mercedes technical director James Allison explained.“It’s a bit like when you take a Phillips head screwdriver and you don’t get it squarely in the cross of the screwdriver and you start to round off the driving face of the screwdriver slot. Related ArticlesaccImages.createImage(); How did it go so badly wrong for Mercedes at F1’s Monaco GP?accImages.createImage(); Vettel credits ‘great decisions on the pit wall’ for big Monaco F1 points haul”Then you simply can’t take the screw out of whatever it is you are trying to take it out of because you’ve no longer got the driving faces. “A very similar thing happened with our pit stop. If the gun starts spinning and chipping off the driving faces of the wheel nut, then in quite short order, given the violence and power of the gun, you can end up with no driving faces and you just machine the nut down to a place where there’s nothing left to grab hold of. “And that’s what we had today.” Allison revealed the wheel was still attached to Bottas’ car after the race and that Mercedes would need to wait to get back to its factory to slice through the wheel nut with specialist equipment.Related ArticlesaccImages.createImage(); Vettel credits ‘great decisions on the pit wall’ for big Monaco F1 points haulaccImages.createImage(); ‘I thought we would end up in the harbour’ – Gasly on Vettel Monaco GP battle“We eventually didn’t get the wheel off, it is sat in our garage with the wheel still on it,” he added.“It will have to be ground off, get a Dremel out and painfully slice through the remnants of the wheel nut. We will do that back at the factory.”