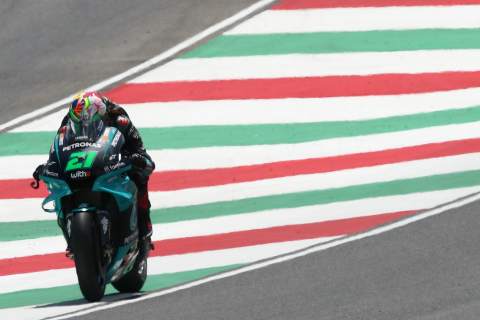 Morbidelli: Third a source of 'pride' with 'shocking' top speed

Franco Morbidelli steered his A-Spec Petronas Yamaha to third place on the Friday practice timesheets for his home Italian MotoGP, despite being left a clear last on the top speed charts.Morbidelli broke the speed trap in a best of 339.6km/h during the afternoon session, which compared with 357.6km/h by the Pramac Ducati of Michele Pirro.But the figure that ‘shocked’ Morbidelli the most was that his 2019-based M1 was some 5.4km/h slower than the next closest bike on the speed charts, the Aprilia of rookie Lorenzo Savadori.”Definitely, I’m happy to see myself in third position and the fact that when I look at the speed chart, I see myself so far from the top and also so far from the [next fastest rider] gives me pride,” Morbidelli said.”I realise that we are doing something great and this gives me confidence and energy to keep working.”The reigning title runner-up added that the near 20km/h difference to Pirro, “is a shocking number but not as shocking as the difference compared to the [next] fastest bike, 5k.Related ArticlesaccImages.createImage(); Italian Moto2 Grand Prix, Mugello – Free Practice (2) ResultsaccImages.createImage(); Italian Moto2 Grand Prix, Mugello – Free Practice (2) Results”There is the whole speed chart [covering rest of the riders] and then there is me 5ks later.”So here in Mugello it seems that we are struggling a bit more compared to usual. We are working already to find some ways to improve on that.”But if nothing else, Morbidelli’s performance proved once again that being fast at Mugello is about much more than straight-line speed.Related ArticlesaccImages.createImage(); Bagnaia snatches top spot in Friday practice at MugelloaccImages.createImage(); Italian MotoGP, Mugello – Free Practice (2) Results”It felt great to ride again here,” said Morbidelli, who is chasing his first Mugello podium this weekend. “I had a lot of fun today. Moreover I was fast with the soft tyre and I’m happy about that.”We need to work a little bit more to see how we are with used tyres, but I think that so far, so good. We started well.”Morbidelli’s performance also made him the top Yamaha on day one, just ahead of former team-mate and current world championship leader Fabio Quartararo (Monster Yamaha).”4The Frenchman’s team-mate Maverick Vinales, quickest in the morning session, slipped to eighth overall in the afternoon with Morbidelli’s factory-spec team-mate Valentino Rossi only 21st (+1.572s).topspeed.jpg accImages.createImage();