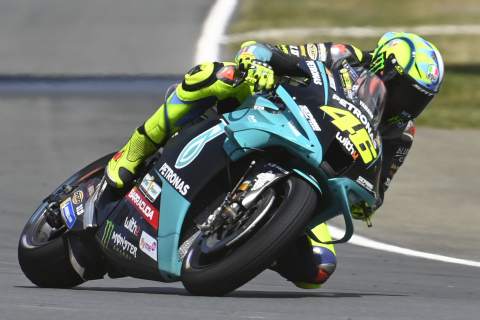 Three out of the next four MotoGP races are at tracks that Valentino Rossi has enjoyed great success at, and therefore ones that will be important when evaluating whether he will continue next season.Rossi has maintained that the summer break is when he will make that decision, but before then, are races at Mugello, Barcelona, Sachsenring and Assen. Rossi alluded to making a step in the Jerez test following round four of the season in Andalucia, but with poor weather in Le Mans affecting the evaluation of that progress, Mugello will be a primary opportunity to assess if he’s carried that momentum forward.”We now have a very important period of the championship because we have four races in five weeks,” added the nine-time world champion.  “Also, at important race tracks like Mugello, Barcelona and Assen and then without Finland we will have one month off. “Everybody will start to think about 2022 during that period, so like I said at the beginning, at that point I will make my decision. Related ArticlesaccImages.createImage(); Marquez: Rossi and I have different racing mentalitiesaccImages.createImage(); Rossi seeking to confirm test improvements at ‘fantastic’ Mugello”But also it’s not only my decision, I have also to speak with the Petronas team and also with Yamaha to understand what their plans are for next year. We will see but for sure now these four races are very important for us to try and find some good results.”While it remains to be seen whether Rossi will continue next year, either with Petronas Yamaha or possibly his new VR46 team, this weekend’s Italian Grand Prix could be his last. Rossi was asked whether he still gets nervous ahead of his home race in Mugello, to which he said: “Yes during the week from Monday you feel the special Mugello pressure. Related ArticlesaccImages.createImage(); MotoGP podcast with Keith Huewen: Miller delight, Marquez despairaccImages.createImage(); MotoGP Gossip: ITV4 attracts peak audience, Ciabatti admits 8 Ducati’s possible”It’s a bit different and when I wake up Monday I feel a bit strange and I think why, but after it’s because it’s Mugello week. “Sometimes it is difficult to manage, but it is a great feeling and I think that under one point of view it is easier this year because we have less pressure from the paddock, from the people around the track, it’s a bit more quiet.”