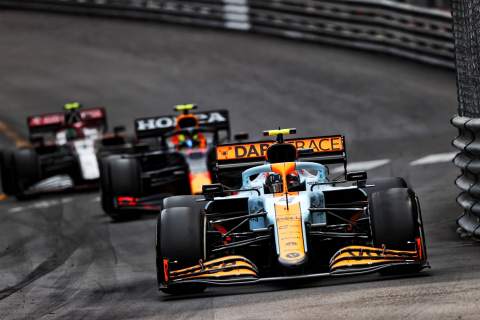 Norris ran in fourth for the opening stint, moving up a place from his starting grid position due to Charles Leclerc’s non-start.The McLaren remained within touching distance of the leading trio before the round of pit stops.Norris struggled with performance when he switched to the hard tyre and came under pressure from Red Bull’s Sergio Perez in the closing laps.The young Brit managed to fend off Perez to score his second podium finish of the season – a result that moves him up to third in the drivers’ championship.Explaining how his car felt during the 78-lap race in the principality, Norris said: “I think it was mixed, the first stint we were pretty competitive I think, pretty similar on pace to what Carlos was doing, Bottas and Max.“Maybe Max was slightly ahead but I could see on the TV screens when I was going past what lap times Max was doing in the lead, I wasn’t that far behind. I was like ‘Oh, OK, this is going well’. But as soon as we pit the hard tyre on, it kind of turned to the opposite and it was a much more difficult car to drive.Related ArticlesaccImages.createImage(); ‘I thought we would end up in the harbour’ – Gasly on Vettel Monaco GP battleaccImages.createImage(); ‘I thought we would end up in the harbour’ – Gasly on Vettel Monaco GP battle“Much easier to lock up, snatch the fronts. Not a lot of confidence, as soon as I heard where Sergio was in terms of his tyre strategy, how much later he boxed, I got pretty worried. But I kept it on the black stuff, which is the most important, didn’t hit any walls. As long as you’re good out of the last corner and out of Turn 8, you cover those two places well, he’s not going to pass. So it wasn’t too bad.”Norris’ qualified just over 0.2s off pole position in qualifying and he felt it was a great achievement.“We kind of went into it with not many expectations at all,” Norris added. “But it turned into probably one of our best weekends altogether, bar maybe Imola.Related ArticlesaccImages.createImage(); Hamilton critical of “really poor” Mercedes performance in F1 Monaco GPaccImages.createImage(); Hamilton critical of “really poor” Mercedes performance in F1 Monaco GP“The car has been pretty good to drive, I’ve got a lot of confidence, I felt comfortable. I think that showed yesterday with probably an alright outright package, not being quite there yet with these guys.“But with that confidence to push the car in qualifying, to be only two tenths off was cool, a great achievement for us, even though it was only P5. To be there, to make the most of other people’s mistakes, Bottas’ one with their pit stop, to grab a podium too.”