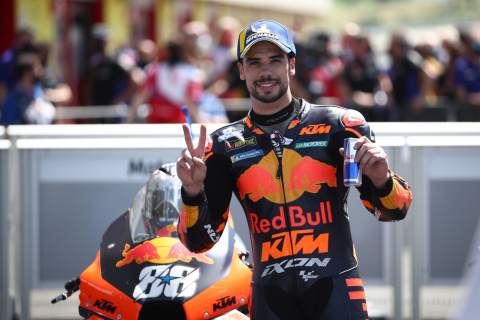 Miguel Oliveira secured second place at the Mugello MotoGP despite a post-race penalty for exceeding track limits. Oliveira was originally demoted from second to third, however, Joan Mir also incurred the same track limits penalty which meant both positions were returned to each rider. The section of green run-off in question was the exit of turn five which coincidentally was the same part of track that cost Joe Roberts a Moto2 rostrum. Whether it was Roberts, Oliveira or Mir, all three incidents were very marginal. Oliveira spoke about the penalty and subsequent challenges with turn five on a MotoGP bike.”The penalty is in the rules. I don’t think I gained any advantage touching the green there. I think even in Misano last year we asked to extend the painting out of the last corner just to avoid this kind of situation,” added Oliveira. “To maneuver the bike at high speeds at the exit of that corner (Turn 5), it’s quite hard and so it’s already a fight just to stay in the track. Related ArticlesaccImages.createImage(); ‘Difficult day’ following Dupasquier tragedy – Joan MiraccImages.createImage(); KTM’s new chassis and fuel draws praise from Oliveira and Binder”So to touch the green at that high speed when you are already looking into the next corner is quite hard. Fortunately Joan [Mir] went out also.” The second place result is Oliveira and the team’s first podium of 2021, but also their first top ten this season – previous best of 11th at Jerez, following a tough opening five rounds.During the post race press conference, Oliveira summed up his race by saying: “It was a fantastic weekend for us. I think we were quite discreet, but strong in every session. Related ArticlesaccImages.createImage(); Petrucci fastest in warm up, turn three catches Marquez, Espargaro and Mir outaccImages.createImage(); Petrucci fastest in warm up, turn three catches Marquez, Espargaro and Mir outOliveira said: “Everything went accordingly to the best plan I could have imagined. The beginning of the race I couldn’t stay with the top group because I had the hard front tyre. “I was a bit more careful. I needed to give it a good warm up before I began to push and then everything worked really well. “I managed to overtake Johann [Zarco] and then keep the other Joan [Mir] behind. I really enjoyed riding today given the circumstances we all know. It’s a good result to carry this momentum into Barcelona.””4