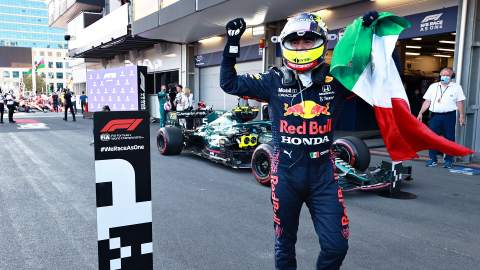 The race was overshadowed by a pair of major tyre blowouts that will leave serious questions for Pirelli to answer, after both Lance Stroll and Verstappen were eliminated by sudden left-rear delaminations.Verstappen had looked on course to take a well-deserved victory in Baku but ed out at high-speed along the main straight just four laps from the end.The Dutchman had dominated the race up until his accident, having jumped Lewis Hamilton in the pits and pulled clear of his main rivals when the race restarted following a mid-race Safety Car that was thrown when Stroll ed out due to his own tyre woes.Following a lengthy red flag suspension to clear the significant amount of debris strewn across the track, the race resumed with a standing start restart for a two-lap sprint to the finish to determine the victor.2822556.0064.jpg accImages.createImage();The drama continued at the restart as Lewis Hamilton overshot Turn 1 and ran straight down the escape road with his brakes almost on fire in his bid to snatch the lead from Perez.Hamilton ultimately finished 15th as he missed an open goal to retake the championship lead from Verstappen.Hamilton’s rare error opened the door for Sebastian Vettel to claim his first podium for Aston Martin, while AlphaTauri’s Pierre Gasly completed the podium in third.Related ArticlesaccImages.createImage(); Hamilton accidentally hit ‘magic’ switch that led to critical F1 erroraccImages.createImage(); Verstappen had no warning of Azerbaijan GP F1 tyre failureGasly came out on top of a huge late scrap with Ferrari’s Charles Leclerc for the final place on the rostrum, with the pole sitter left to settle with fourth place at the chequered flag.Lando Norris finished fifth for McLaren, ahead of Alpine’s Fernando Alonso and AlphaTauri F1 rookie Yuki Tsunoda, who scored his first points since the Bahrain season-opener. Carlos Sainz, Daniel Ricciardo and Kimi Raikkonen completed the rest of the top-10 order for Ferrari, McLaren and Alfa Romeo. Related ArticlesaccImages.createImage(); Verstappen had no warning of Azerbaijan GP F1 tyre failureaccImages.createImage(); F1 World Championship points standings after the 2021 Azerbaijan GPIt proved to be a disastrous day for Mercedes as neither driver scored points, with Valtteri Bottas struggling to 12th in what was a dire performance from the Finn. Full race results from the 2021 F1 Azerbaijan Grand Prix.XPB_1090720_HiRes.jpg accImages.createImage();