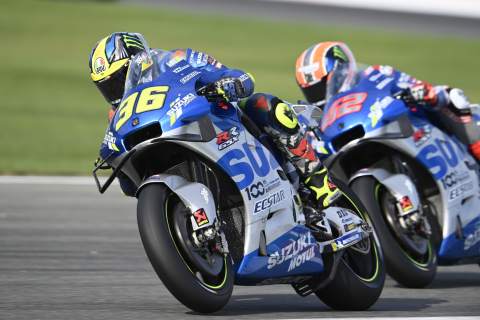 After the celebrations of Joan Mir’s historic riders’ 2020 MotoGP World Championship riders’ title success in Valencia, the Suzuki Ecstar outfit will now refocus as it bids to sign off from the season by clinching a remarkable clean sweep of trophies.Check out the MotoGP YouTube channel – CLICK HEREFive years after returning to MotoGP in its current ‘Ecstar’ guise under the stewardship of Davide Brivio, Suzuki has already wrapped up the riders’ title with Mir and, with the help of Alex Rins, sealed the teams’ crown too.As such, for this weekend’s 2020 Portuguese MotoGP finale in Portimao, attention turns to the constructors’ title, a more keenly-fought contest and one limited for Suzuki by the fact it only runs two bikes on the grid in contrast to four of its five rivals which run satellite entries too.  Indeed, in a year of ups and downs for all manufacturers, it goes some way to explaining why Suzuki – even with fewer entries – is still well in the hunt coming into the final round, level on points at the head of the table with Ducati, which can count on six bikes to secure brand points.Mathematically there are three manufacturers still in with a shot at the title, together with Yamaha which is 13 points shy despite having seven wins to its name, compared with Suzuki and Ducati’s two apiece.It’s a situation Suzuki manager Brivio admits he is thrilled to be involved in, even if he admits it will be a great challenge at a brand new venue as Portimao.“The whole team are still feeling amazing after what happened last weekend in Valencia, we truly achieved our biggest dream with Joan. “We’re looking forward to getting back on track for the last race of this year, and we’re hoping to complete the ‘triple crown’ of Riders’, Teams’, and Constructors’ titles – that would be absolutely incredible. For sure it won’t be an easy weekend because this circuit is new for everyone, but we’ll give our best from Friday onwards and see how it turns out.In addition to the three formal world titles, Rins also stands to make it a full clean sweep provided he can overhaul Franco Morbidelli for the runners-up spot in the standings. One of six riders in the hunt for second overall, he is just four points behind the Italian.