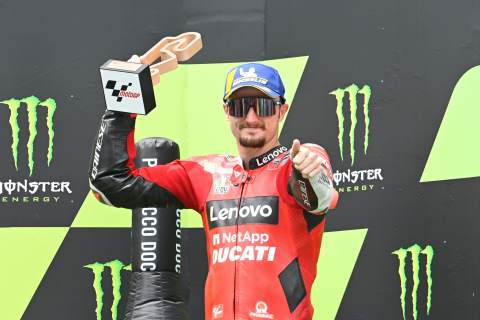 Miller knew Quartararo would receive penalty, ‘we all know the rules'

Jack Miller has moved ahead of team-mate Francesco Bagnaia in the MotoGP world championship after claiming third place in Catalunya. Miller was promoted to third after the race following Fabio Quartararo’s penalty for straight-lining the turn one chicane. Asked if he was surprised to claim third, Miller said: “No not really. Yeah not really. First of all the race was going really good for me, I executed my plan more or less to perfection, got out front and felt fantastic. “I had a couple of lunges on Fabio [Quartararo], but I had already seen when Johann [Zarco] went past him he went straight on at the chicane, and we all know the rules.”If you go through the chicane; I know for me even though I was braking really late I’d still make the chicane – because if not it costs you and you gotta drop a second or something like this or you get the long lap penalty. “When I saw him go through the chicane and go like that (open the throttle) and peel back in front of me I thought, ‘ooh, that’s a bit cheeky’, but it will be alright. Related ArticlesaccImages.createImage(); Medium tyre ‘a mistake, impossible to accelerate’ for Bagnaia in closing lapsaccImages.createImage(); Medium tyre ‘a mistake, impossible to accelerate’ for Bagnaia in closing laps”Then I had a couple of lunges at him because no one really wants to get a podium like this, but then on the last lap I was just locking the front too much and thought, ‘I’ll just get as close as I can be behind him’ and just see over the line. “It was a good day for us, we moved up a place in the championship, and yeah, gained on Fabio [Quartararo], lost on Johann [Zarco], so it’s six of one and half a dozen the other.”  The race wasn’t without problems for Miller though, as the factory Ducati rider suffered with front locking and also front tyre temperature whilst following other riders.Related ArticlesaccImages.createImage(); ‘Podium is perfect’; Zarco gains points on QuartararoaccImages.createImage(); Oliveira expected Quartararo to be faster, ‘happy’ to hold Zarco at bay”At turn five I missed a gear later on and went wide, but once I was in the draft of the other guys I started to suffer a lot with the front tyre temperature,” said Miller. “I had the light coming on pretty much straight away. I was trying everything I could not to sit in the slipstream, just trying to get some cold air on the tyre, but no matter what I did I couldn’t get it to drop which was playing on my mind a little bit. “I was able to manage the rear tyre especially when they were behind me at the beginning. I was being really, really gentle on the rear tyre just to be there at the end.””4