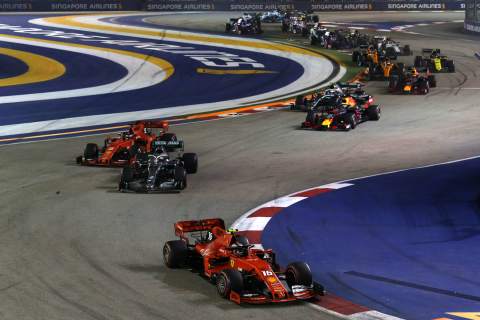 A report from the BBC on Friday revealed that F1 and the Singapore authorities have agreed it will not be possible to hold the event due to immigration restrictions amid the ongoing coronavirus pandemic.On Friday evening, the Singapore Grand Prix promoter formally confirmed the race will drop off the calendar for the second consecutive year. “We would not be able to deliver a full event experience [that] fans have come to expect… while safeguarding the health and safety of our fans, contractors, volunteers and staff,” a statement read.  understands that F1 is considering multiple options to replace the Singapore round, which was due to be held on October 3, one week before the Japanese Grand Prix.One alternative would be to stage a second race in the United States, most likely at Austin’s Circuit of the Americas, which is already set to host the US Grand Prix on October 24.For this to go ahead, Japan’s round at Suzuka would have to be moved forward by a week to fill Singapore’s original slot.Related ArticlesaccImages.createImage(); ‘Something fundamentally wrong’ as Mercedes has “worst Friday”accImages.createImage(); Norris: McLaren ‘a long way off’ Red Bull & Ferrari after Baku F1 practiceAnother solution would be to reinstate the Chinese Grand Prix, which was postponed earlier this year, though this would also involve a date swap with Japan.Alternatively, Turkey could be drafted onto the 2021 schedule.Istanbul Park was due to substitute for this month’s postponed Canadian Grand Prix but the plan had to be abandoned after Turkey was added to the UK’s travel red list in May.It is unlikely Singapore will be the last race on the current 2021 F1 world championship calendar to be affected.Related ArticlesaccImages.createImage(); Norris: McLaren ‘a long way off’ Red Bull & Ferrari after Baku F1 practiceaccImages.createImage(); Leclerc doubts Ferrari F1 can challenge Red Bull, remains wary of McLarenUncertainty regarding the COVID situation in Asia, Mexico and Brazil could lead to a further reshuffling of events later this year.F1’s 2020 schedule ended up being predominantly made up of European-based events.An F1 spokesperson told : “We continue to work with all promoters during this fluid time and have plenty of options to adapt if needed.”