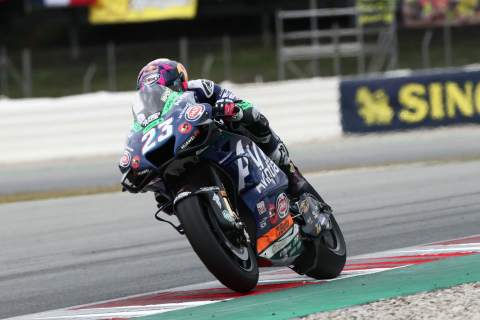 It was a shortened Catalunya test for Enea Bastianini compared to most, as the Italian completed 36 laps – only Franco Morbidelli totalled less of the current MotoGP riders. The reason for this is Bastianini had been suffering with ‘pain’ in his shoulder and arm since Sunday’s race day. Even so, Bastianini still managed to take his third top ten of the 2021 season during round seven in Barcelona. Last year’s Moto2 world champion alluded to it being an ‘important’ test regardless of physical condition, and that improvements came regarding mid-corner speed in particular. The Italian didn’t elaborate on what new parts he tried, however, the 23 year-old did say they involved the front end of his Ducati machine. Bastianini added: “Today was a difficult day because since yesterday morning I have had some pain in my shoulder and also in my arm. Related ArticlesaccImages.createImage(); Zarco has not spoken to Bastianini about Mugello incidentaccImages.createImage(); Johann Zarco tops MotoGP warm up; Marc Marquez, Pol Espargaro again”The test was important, especially to work on the middle part of the corner because I’m a bit slow in this area and especially in this race to release the brake was difficult for me. “I’ve tried some new things on the front, I managed to improve my feeling and I feel more competitive also on used tyres. We’ll see if all this works for us at Sachsenring.”Following last weekend’s race, Bastianini remains atop the rookie of the year honours – seven points ahead of Jorge Martin who made his MotoGP return in Spain.Related ArticlesaccImages.createImage(); Marini ‘congratulations to VR46’, Bastianini ‘I think my future is with Ducati’accImages.createImage(); Luca Marini ‘curious to race’ MotoGP bike at Jerez