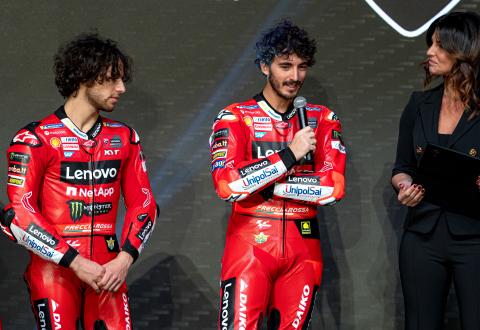 While Bagnaia returned Ducati to the top of the MotoGP table for the first time since Casey Stoner in 2007, Bastianini earned promotion to the official team with four wins and third in the standings on a year-old bike at Gresini.Two of those victories, at Le Mans and Aragon, came at Bagnaia’s expense, while the #63 triumphed over Bastianini at Misano and Sepang. Now they will share a garage, with Bastianini picked to replace Jack Miller.“It will be different because with Jack everything was settled. With Enea everything starts from zero and the battles of last year make a lot of ‘noise’ for sure,” Bagnaia said.“We are both Italian, and people are always searching for duels. So it’s more from the outside, this pressure [on] us to be aggressive. But it wasn’t like this. We have a great relationship. We were always speaking.“It’s true that if Enea will beat me, I’ll be not angry, but I would be… frustrated. But with all riders that is normal.”Pecco Bagnaia & Ducati will use NUMBER 1 in 2023! | MotoGP 2023Video of Pecco Bagnaia & Ducati will use NUMBER 1 in 2023! | MotoGP 2023Francesco Bagnaia: This is where the best MotoGP riders make a differenceGigi Dall’Igna: Statistics say it’ll be a tough challengeFrancesco Bagnaia to race with #1 plate, can he break the ‘curse’?‘We have to [work] together… until the race’“For sure last year Enea was incredible,” Bagnaia continued. “Without the factory bike and in an independent team, he was doing a really good job and after three races he was leading the championship. It demonstrated that he’s very competitive, he was there fighting to win and it’s great that it’s like this.”Bagnaia, who enjoyed an excellent working relationship with Miller, highlighted the need for team-mates to co-operate in the pit box before slugging it out in the race.Related Bastianini: Favourites? ’Marc is Marc’, Bagnaia: ‘It’s like a school register!’ Bagnaia: This is where the best MotoGP riders make a difference“It will be very important to be smart this year, to understand that we have to [work] together to be in front and then in the race it’s another story. Then everyone can do what they want to do, but in the box we have to work well and I think we are smart enough to understand and work well together.”‘Enea pushes like a bastard! Battle between us will be intense’“We’ve known each other for a long time, from when we were racing with the pocketbike,” Bagnaia said.“Describe Enea? Like he said himself last year, he pushes like a bastard! But no, I think he’s a smart guy and a very competitive guy.“We want the same thing and we will do the maximum to achieve it. So the battle between us will be intense, but we have to be intelligent and respectful to have a good relationship.” Bastianini: ‘Pecco fastest rider in the world, I must stay aggressive’“The big difference [between Pecco and I] is that Pecco is MotoGP world champion and I’m not!” smiled Bastianini.“Pecco is really fast. When he was young we battled a lot with the pocketbike, then after with the MiniGP and in Moto3. Not in Moto2 because he arrived before me.“But now he is the fastest rider in the world. It is a pleasure to battle, to fight with him the next season to try to win.”The 25-year-old, who caused some tense moments in the Ducati pits as he went ‘bar-to-‘bar with Bagnaia last season, warned he will ‘stay aggressive’ on track.“My approach with Pecco has been the same and will be the same, but I must stay aggressive I think,” he said.“With Pecco I have only tried to do all the time, my own race. And now he’s my team-mate, he’s a world champion and my relationship is really good and I think we’ll continue like this.“Last year I was fast, I’ve tried to modify a little bit my approach, but [I’ll still] be aggressive.””4Ducati is taking a more conservative approach to technical development with the latest Desmosedici, after the factory team suffered a slow start to last season.The first official 2023 MotoGP test takes place at Sepang in Malaysia from February 10-12.