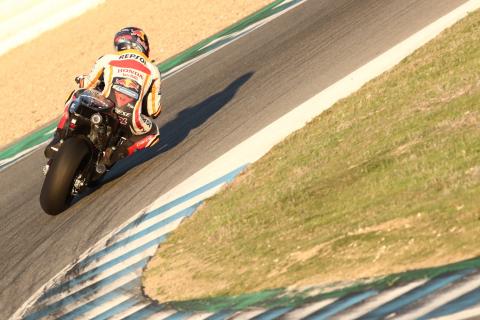 As technical manager of the GSX-RR project, Kawauchi oversaw seven wins and one world title from the bike’s 2014 debut until Suzuki’s shock exit at the end of last year.Rumours that Kawauchi would not be settling for a desk job at Hamamatsu but continuing his racing career by moving to Honda first emerged in mid-January.Kawauchi’s arrival in place of previous Honda technical director Takeo Yokoyama was subsequently confirmed and Kawauchi is now present in HRC attire at this week’s private test at Jerez.Pecco Bagnaia & Ducati will use NUMBER 1 in 2023! | MotoGP 2023Video of Pecco Bagnaia & Ducati will use NUMBER 1 in 2023! | MotoGP 2023Francesco Bagnaia: This is where the best MotoGP riders make a differenceGigi Dall’Igna: Statistics say it’ll be a tough challengeFrancesco Bagnaia to race with #1 plate, can he break the ‘curse’?MotoGP test rider Stefan Bradl is sharing the track with World Superbike teams as Honda prepares the latest RC213V parts for next month’s Sepang test, the first outing of the year for race riders Marc Marquez, Joan Mir, Alex Rins and Takaaki Nakagami.Honda sources told that Kawauchi is mainly using the Jerez test to get up to speed in his new role and understanding of HRC.It will take time for Kawauchi to have a direct impact on technical development at Honda since most of the current parts were designed following feedback from last year. Flashback: Suzuki’s Ken Kawauchi and HRCs Shuhei Nakamoto at Brno 2012, during Suzuki’s previous ‘pause’ in its MotoGP activities from 2012-2014.While Kawauchi’s GSX-RR signed off with two wins in its last three races, 2022 saw Honda suffer its second winless MotoGP season in the last three years.Related Is Suzuki’s Ken Kawauchi joining Honda’s MotoGP project?Kawauchi’s arrival is also a major boost for his former Suzuki riders Mir and Rins, who were only 18th and 20th on their Honda debuts at November’s Valencia test.Alex Rins: ‘Ken was a key part of our success in Suzuki’Rins reacted to the news of Kawauchi’s arrival by posting on social media:”Very happy to see this!  Ken was a key part of our success in Suzuki, he developed the bike and made it competitive until its very last lap so it is great news to have him to work in our new challenge!”Kawauchi is not the only ex-Suzuki MotoGP team member switching to HRC with technician Toshifumi Fukae announcing his move on Instagram:    View this post on Instagram           A post shared by Toshifumi.Fukae (@fka_moto)