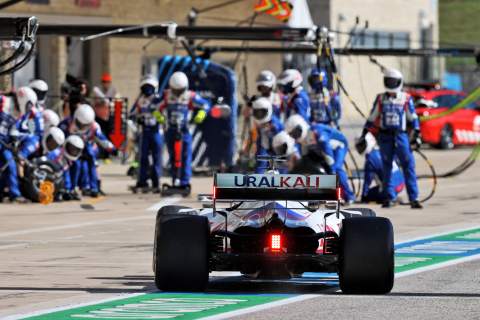 The headrest is an important safety tool in F1 that absorbs the impact of the driver’s head striking the sides of the cockpit during a .Most notably, Lewis Hamilton’s headrest came loose midway through the 2017 Azerbaijan Grand Prix, costing him the victory.”ad_The Haas driver was forced to make an unscheduled pit stop on the opening lap in Austin.“In Turn 2 the headrest came off in my car and it was quite a sketchy first lap as it lifted the back of the headrest and blocked both the left and right mirrors,” Mazepin said.“So I had to ask the team if there was anyone around me and hoping there was nobody as I couldn’t know where to turn in or not.Related Austin performance struggles came as a surprise to Alpine Was United States GP win Verstappen’s best race yet in F1?“That [pit stop] added over 25 seconds of race time so yeah that made it pretty difficult as I was driving on my own, trying to make one stop possible, but with these temperatures and these tyres it was just not possible.”Team boss Guenther Steiner confirmed that the team ensured the headrest was secured when he pit on the opening lap rather than replacing it entirely.Related Aitken handed Williams F1 practice outing for Abu Dhabi season finale Sainz: Ricciardo US GP F1 move ‘on the limit of legality’ “Apparently, what the guys told me when they put it on the grid, there are two pins in the back that weren’t engaged completely so therefore we didn’t have to take the headrest off when he got in the pits, they just pushed it down and in,” Steiner added. “It didn’t engage. I don’t know the exact details but it didn’t engage. It came off in Turn 3, I think he said Turn 3 or 4 and you need to come in the pits because otherwise, you get a black flag for safety reasons. “It’s part of your protection here so we called him in immediately but again it was difficult because if the headrest is up you cannot see in the mirrors. Anyway, we got him in and they just pushed it in and off he went and we changed tyres obviously when we had the chance.”Mazepin also complained of ‘burning feet’ over team radio: “I’m also crying inside the car with how feet are burning. It’s like they’re standing on something very hot. We’ll need to investigate,” he said.”4Steiner was unsure of the cause of the issue and revealed that it’s not a problem that has affected Mick Schumacher in the second Haas or one that arose last year.“He complained about the feet getting hot a few times,” Steiner explained. “He always tried to make it better but it seems that it only happens to him. This is the same chassis as last year but we never had the issue with it. I didn’t ask specifically Mick but he never complained about it but for sure he would have. “We need to look into why he gets hot, we need to do something. Maybe the next step is to do something on the boot, you can do it both ways. There was nothing broken or anything, and it’s not the first time he’s complained about that one.””5