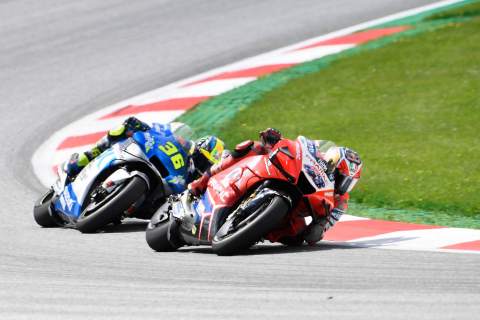 Jack Miller has brushed off the mistake that cost Ducati a 1-2 result in the Austrian MotoGP at the Red Bull Ring after ceding the position to Joan Mir on the penultimate bend.Check out the MotoGP YouTube channel – CLICK HEREA sour end to what was a strong race for the Australian, he led for several laps after getting the hole-shot from the front row in both the scheduled start and the restart following a red flag period.On the second occasion he couldn’t hold a charging Andrea Dovizioso – whom he will replace as team leader at Ducati next season – at bay but appeared to have the measure of the close-following Mir aboard the Suzuki.With the Suzuki looking stronger through the second half of the lap, Miller defended hard in the final corners, but went to deep to run wide on the exit and allow Mir through. As he later discovered, Mir wasn’t attacking him as closely as he thought.“The two starts, I hole-shot both of them, second one was a bit dodgy though, fired it up the inside pretty deep and went long!“I was having fun out there but I made a small error on the last lap, I thought Joan was closer than he was and I tried to close the line and then she started bouncing on the front.”Looking ahead to next weekend’s Styrian MotoGP to be held at the same venue, Miller says he will work on improving his performance through the second half of the lap to give him a shot at victory.“I still need to work on the middle and last sector are our weak points, sector one I have dialled to a tee. I have a lot of fun doing a Scandinavian flick into Turn 3, we just need to get the last sector dialled in for next weekend.”