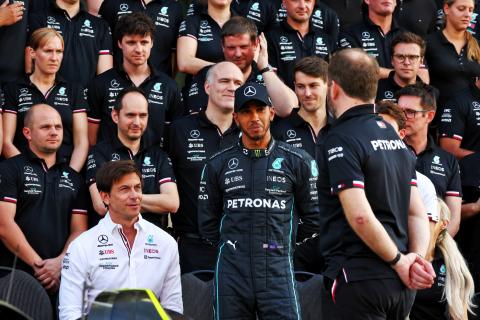 
Mercedes endured their worst F1 season since 2012, scoring a single victory and pole position throughout the 22-race season.Hamilton reveals “difficult conversations” with WolffIt was statistically Hamilton’s worst season as well, slumping to sixth in the drivers’ championship behind new teammate George Russell.Michael Schumacher vs Lewis Hamilton: The never-ending debate?Video of Michael Schumacher vs Lewis Hamilton: The never-ending debate?Mercedes’ form was poor in the first portion of the year as they struggled with porpoising.They turned it around by the summer break, often challenging Red Bull at certain races such as Hungary, Zandvoort, USA, Mexico and Brazil.After years of dominance, it was new territory for Mercedes, who hadn’t not won the constructors’ championship since 2013.Reflecting on the previous season, Hamilton conceded that 2022 was “one of the hardest years for us as a team”“2022 was one of the hardest years for us as a team. We didn’t have a great car. We had struggles, as many people do,” Hamilton told the On Purpose podcast. Related Why Wolff won’t “meddle” with Mercedes technical decisions despite tough 2022 Hamilton opens up on childhood racist abuse: ‘Bananas were thrown at me’“We all had to come closer. I’ve worked with this team for 10 years but, [last] year, people have opened up like they never have before.Hamilton opens up on childhood racist abuse: ‘Bananas were thrown at me’“People have cried. It has been beautiful to see. We are a better team than we ever were before.”While winning an eighth world title remains at the heart of his ambitions, Hamilton continues to campaign for more diversity and inclusion in the sport.Mercedes switched to a black livery for the 2020 and 2021 seasons, moving away from their traditional silver, to show their stance against discrimination.  Hamilton has since started the Mission 44 foundation, and Ignite, in conjunction with Mercedes, to combat diversity-related issues.“We live with intention, we talk about impact,” he added. “Everyone in the team had diversity and inclusion training.“It’s my job to make sure that the effort we’ve put in doesn’t fall away.”