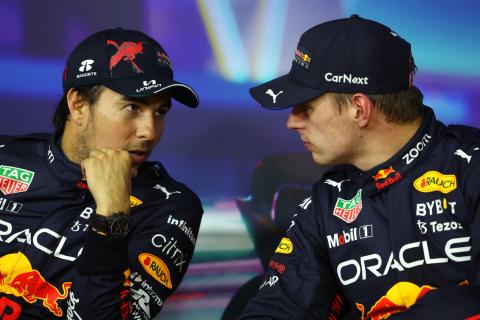 
Red Bull head into the new season hoping to retain the constructors’ championship and guide Verstappen to a third consecutive drivers’ title.But amid the glory came a shocking teammate bust-up in Brazil – Verstappen flatly refused Red Bull team orders to allow Perez to pass him.Verstappen vs Perez: Has their relationship gone bad?Video of Verstappen vs Perez: Has their relationship gone bad?”I tell you that the best of Checo Perez, we have not seen yet,” his father Antonio told Encancha. “He has much more to give and surely with the passage of time Mexico will have an F1 champion in the hands of Checo Perez.”Perez reacted to his row in Brazil by saying about Verstappen “he’s shown who he really is”.And Verstappen referred to an incident earlier in 2022 – when Perez caused a red flag in qualifying at Monaco, before eventually winning the race. But Red Bull have smoothed out the tension between their drivers.“It’s a great relationship, it’s a big family,” Antonio said of the team dynamic. “There are many things that look different, I can tell you that the best thing that has happened in the history of Checo Perez’s sport has been his relationship with Red Bull. Related Verstappen set to buy a new Ferrari? Spotted in Monaco showroom Ex-F1 driver claims Verstappen’s title ‘not valid without Russia’“You have to remember that Checo was not at this level and he found it, after he lost everything in Force India and Racing Point, when he was fired and he is unemployed, but in these two years they have been the most important in all terms for Checo Perez, emotionally, as a dad, he is at his best.”