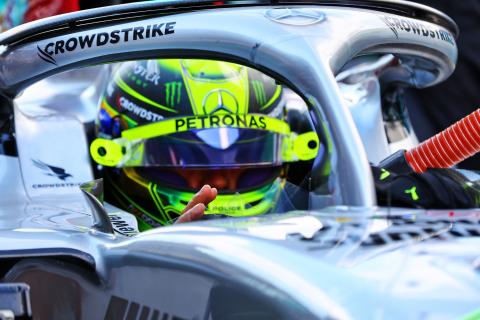 Schumacher? Senna? Hamilton says: “There has never been a driver like me”


The seven-time world champion failed to win a race or take a pole position for the first time since making his F1 debut in 2007 during a difficult 2022 campaign. Hamilton was also beaten by new teammate George Russell as he slumped to his worst finish in the F1 drivers’ championship amid Mercedes’ challenging start to a new era of aerodynamic regulations. Michael Schumacher vs Lewis Hamilton: The never-ending debate?Video of Michael Schumacher vs Lewis Hamilton: The never-ending debate?It was a year that marked Hamilton’s 300th grand prix, with the Briton ending the season on 310 starts. Curiously, no driver has ever won a race after reaching the milestone, but Hamilton is determined to change that. “But there has never been a driver like me either,” Hamilton quipped when informed of the statistic during an interview with Formula 1 Magazine. Hamilton opened up about his 2022 struggles and not being able to compete for the world championship after being denied a record-breaking eighth drivers’ crown in the controversial 2021 Abu Dhabi Grand Prix. “We wanted to hit back after 2021,” Hamilton said. “That was what our drive came from.“But at one point I thought, ‘God, with this car I really can’t fight for the title.’Related Hamilton: ‘Problems between me and Max? Why should I have a problem?’ McLaren F1 boss reveals one ‘frustration’ about Norris “If I can say anything about last year, it’s that as a team we’ve only become more resilient and determined.” Hamilton’s career stats versus other F1 greats Lewis HamiltonStarts: 310 Championships: 7Wins: 103Podiums: 191Points: 4405.5Pole Positions: 103 Michael Schumacher Starts: 306 Championships: 7Wins: 91Podiums: 155Points: 1566Pole Positions: 68 Juan Manuel Fangio Starts: 51 Championships: 5Wins: 24 Podiums: 35Points: 245Pole Positions: 29 Alain ProstStarts: 199Championships: 4 Wins: 51 Podiums: 106Points: 768.5 Pole Positions: 33Sebastian VettelStarts: 299Championships: 4Wins: 53Podiums: 122Points: 3098Pole Positions: 57 Ayrton Senna Starts: 161Championships: 3Wins: 41Podiums: 80Points: 610Pole Positions: 65