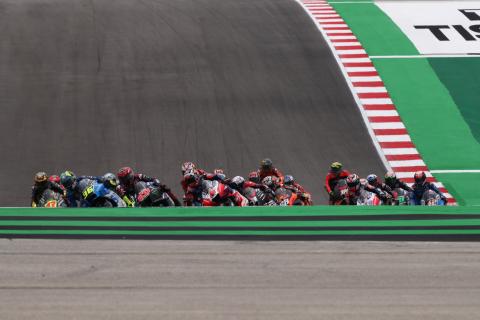 Sprint races ‘will change the championship’, ‘have to be smart’

The Sprints mean that despite this year’s calendar featuring only one more round than last year’s record of 20, the number of races this season will leap to 42.Although only of half-distance, for half points (12 for a win), that still means a potential 252 points will be up for grabs during the Sprint races.To put that into perspective, Francesco Bagnaia won last year’s title with 265 points ahead of Fabio Quartararo on 248.Pecco Bagnaia & Ducati will use NUMBER 1 in 2023! | MotoGP 2023Video of Pecco Bagnaia & Ducati will use NUMBER 1 in 2023! | MotoGP 2023Francesco Bagnaia: This is where the best MotoGP riders make a differenceGigi Dall’Igna: Statistics say it’ll be a tough challengeFrancesco Bagnaia to race with #1 plate, can he break the ‘curse’?In order to accommodate the Sprints without increasing engine mileage, Free Practice has been reduced from 4 to 3 sessions each weekend, with Qualifying moved to Saturday morning.Qualifying will become even more important due to the shorter Sprint distance allowing less time to fight through the field and because – unlike some other championships – Sprint results will not determine grid positions for the Sunday grand prix.In other words, each MotoGP qualifying will now count for two race starts (a Sprint and Sunday race). “I think that the Sprint race can make a big difference during the race weekend,” said reigning world champion Bagnaia. “We have to be smart in adapting to it because it’s something different.“After [doing] the first Sprint race, I will understand better the way to work for the new schedule.”Related ‘Economic demands’: Forward Racing ends MV Agusta Moto2 partnership Francesco Bagnaia: Front ride-height ban ‘not a problem’Consistency was a key phrase used in relation to the new format during the recent Monster Yamaha launch for Quartararo and Franco Morbidelli, since injury during a race weekend will now put a potential 37 points at risk rather than 25.But Bagnaia still sees speed as more important: “Consistency was always the key of a champion, but I think that speed is more important than consistency.“It’s a mix of things and for sure consistency [helps] but you also need speed, because to win a championship it’s important to be always in front.” Bastianini: Sprint races can be a problem for mePotential losers from the introduction of Sprint races include riders that suffer in qualifying or typically excel in tyre preservation and late race comebacks.Bagnaia’s new factory team-mate Enea Bastianini falls into that group, with his four race wins last season achieved after taking the lead on lap 18 of 22 (Qatar), 16 of 20 (COTA), 21 of 27 (Le Mans) and 23 of 23 (Aragon).In other words, long after a Sprint race would have finished.The Italian acknowledges he needs to ‘close the gap’ between his early and late race pace to succeed in the Sprints, while highlighting the possibility of a different (softer) tyre choice.“In some Sprint races we can use different tyres compared to the Sunday,” he said. “My style is to conserve [the tyres] a little bit at the start and after I can push more. I have to close this gap because for the Sprint races, it can be a problem for me. But I think we can modify [my style] a little bit.”“I think the first Sprint race will be a test for everybody and my approach to it, like the approach of all the riders, will need to be different. Let’s see how is it and maybe we can speak with Alvaro [Bautista] because he has made a lot of Sprint races [in WorldSBK]…” Bautista: Sprint races will change the championshipBautista, a former MotoGP podium finisher, won four ‘Superpole’ Sprint races on his way to winning last year’s World Superbike title for Ducati.“For sure it will change the championship because they have doubled the number of [MotoGP] races,” Bautista said. “It’s a chance for the riders who struggle in the long race with tyre consumption, plus physical or mental tiredness. It’s an opportunity for that kind of rider.“It will need a different approach because you have to push from the beginning, without caring about the tyres.“In my case, it’s not easy because I struggle a little bit to put some weight on the tyres and to get them up to temperature in the first few laps. And if you lose a few laps at the beginning of a Sprint race then it’s difficult to recover.”4“So I think many riders will have this problem in the [MotoGP] sprint races, but others will have some advantages. They will all have to understand how to approach or manage these kinds of races“But watching from the outside it will be more interesting and better [for the sport].”The first MotoGP Sprint race will be held on the Saturday of the Portimao season-opener, on March 25.