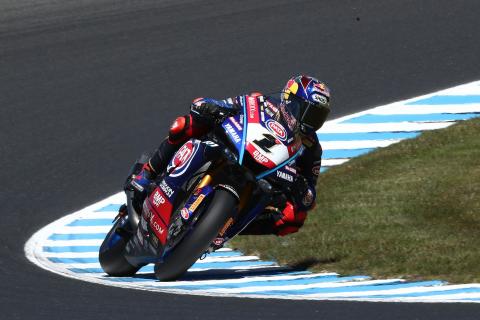 Razgatlioglu is arguably the best rider not competing in MotoGP at the moment, and although a move to the premier class didn’t materialise for 2023, it’s not out of the question for such a move to happen next season.All the factory MotoGP rides are unavailable until the end of 2024 – that’s unless contracts are ended early as we saw with Johann Zarco at KTM for example – with the exception being Morbidelli’s Monster Energy Yamaha seat. Rea: ‘My motivation wasn’t very high’… January tests ‘can be hit-and-miss’Huewen: WorldSBK was ahead of MotoGP in the 80s, are we going to see that again?While in WorldSBK every rider except Jonathan Rea is tied into a deal that concludes after this season, meaning Razgatlioglu could be in a perfect position to replace Morbidelli should the latter fail to deliver the performances Yamaha wants.There’s also the chance Yamaha could choose Razgatlioglu even if Morbidelli does perform relatively well, as the 2021 WorldSBK champion will be in very hot demand from all manufacturers. Last season proved to be Morbidelli’s worst championship finish since joining MotoGP in 2018, and therefore the pressure to perform will certainly be on the VR46 Academy rider.When talking about potential options to replace the former Moto2 world champion and runner-up in MotoGP to Joan Mir, Huewen pointed to Razgatlioglu as a very realistic candidate.Speaking on the MotoGP podcast, Huewen added: “I mean Toprak obviously. It will be interesting – I don’t want to oversell Toprak Razgatlioglu – but he’s obviously brilliant, has a brilliant feel for a motorbike, in fact, anything. Related Rea: ‘My motivation wasn’t very high’… January tests ‘can be hit-and-miss’ Huewen: WorldSBK was ahead of MotoGP in the 80s, are we going to see that again?”A scooter; I saw him in a M3 BMW doing donuts the other day. The guy has so much oozing natural talent, but of course, that last 1% you need to be a MotoGP rider, we’ll find out if he’s got it. “He’s got a good team around. Kenan Sofuoglu, a five-time WorldSSP champion is his manager and is a tough cookie. “They are pretty much focused on getting Toprak the right ride. Somebody, somewhere, there’s a lot to shake out, there really is. Toprak is obviously hanging around waiting for it.”