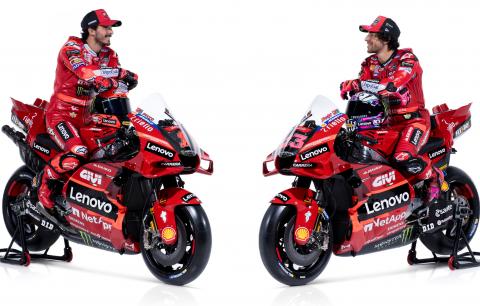 The Italian joined new team-mate Enea Bastianini in unveiling the factory’s latest colours during a launch ceremony shared with Ducati’s title-winning Superbike team at Madonna di Campiglio, Italy, on Monday morning.Bagnaia won seven races and overcame a massive 91-point deficit to take the title from Yamaha’s Fabio Quartararo and become Ducati’s first MotoGP champion since Casey Stoner in 2007.Bagnaia revealed at the launch that he will run the #1 plate in 2023, becoming the first MotoGP rider to do so since Stoner, at Repsol Honda, in 2012. No one has successfully defended the premier-class title while using the #1 plate since Mick Doohan in 1998.While Lenovo remains as title sponsor, Monster Energy has joined Ducati as a new official sponsor on the lower part of the fairing and front air intake (effectively transfering the sponsorship previously assigned to Suzuki). Miguel Oliveira On The Aprilia Could Be The SHOCK of 2023 | MotoGP 2023Video of Miguel Oliveira On The Aprilia Could Be The SHOCK of 2023 | MotoGP 2023FIRST LOOK: Gresini adds ‘pinch more red’ for 2023 MotoGP liveryAlex Marquez: ‘Everyone starts from zero, but Marc’s the favourite’Dall’Igna: Ducati MotoE bike ‘just the start’, lap time ‘really goodBastianini joins the official Ducati team after a stunning four victories and third in the world championship, on year-old machinery, at the satellite Gresini squad last year.The 25-year-old was also involved in several tense end-of-race battles with Bagnaia – winning at Le Mans after Bagnaia fell and launching a successful last-lap victory pass at Aragon, but being kept at bay by Bagnaia at both Misano and Sepang. Bastianini, who like Bagnaia was a Moto2 champion before stepping up to the premier class, in 2021, won a ‘duel’ with Pramac’s Jorge Martin to take over Jack Miller’s factory seat and has made clear he doesn’t intend to be a ‘number two’ to Bagnaia.Miller has moved to Red Bull KTM, alongside Brad Binder, for 2023. Related Official: MotoGP champion Bagnaia to race with #1, can he break the ‘curse’? WATCH LIVE: Reigning MotoGP champion’s Ducati hold 2023 team launch