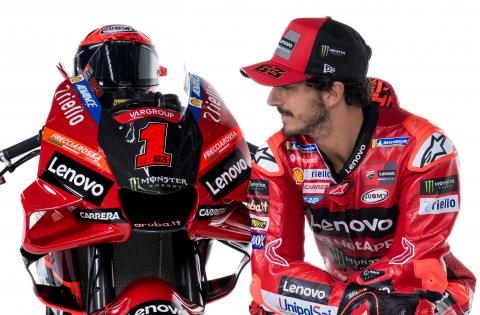 Official: MotoGP champion Bagnaia to race with #1, can he break the 'curse'?

The Italian, who won Ducati’s first world title since Stoner in 2007 using the #63 last season, finally revealed his decision during this morning’s team launch in Madonna di Campiglio, Italy.”It was a complicated process, but I finally picked the number at the photo shoot last week,” said Bagnaia, who won seven races last year.”It was a long time since we saw the #1 in MotoGP. I always admired people racing with #1. It represents your identity as a world champion.”63 will always be my number, and I will use it together with the number 1. So I’ll have a small 63 inside the #1 and on my helmet.”Winning the premier-class title with the #1 plate is something that eluded the likes of Stoner, Jorge Lorenzo and Nicky Hayden. Indeed, the last time a rider took the #1 to title glory in the premier class was back in the 500cc era, with Mick Doohan, in 1998.Miguel Oliveira On The Aprilia Could Be The SHOCK of 2023 | MotoGP 2023Video of Miguel Oliveira On The Aprilia Could Be The SHOCK of 2023 | MotoGP 2023FIRST LOOK: Gresini adds ‘pinch more red’ for 2023 MotoGP liveryAlex Marquez: ‘Everyone starts from zero, but Marc’s the favourite’Dall’Igna: Ducati MotoE bike ‘just the start’, lap time ‘really goodStoner ran the number 1 plate as Ducati’s reigning champion in 2008 and used it again in 2012, after winning his final MotoGP title for Repsol Honda.But with the likes of Valentino Rossi (46), Marc Marquez (93), Joan Mir (36) and Fabio Quartararo (20) electing to stick with their personal race numbers as reigning champions, the only other times the #1 has been seen in the ‘MotoGP’ era is with Hayden (2007) and Lorenzo (2011).Related FIRST LOOK: Bagnaia’s #1 Ducati livery, Bastianini in factory red WATCH LIVE: Reigning MotoGP champion’s Ducati hold 2023 team launchHowever, Lorenzo kept his usual #99 after his subsequent title victories in 2012 and 2015.Alvaro Bautista, Ducati’s reigning WorldSBK champion, has also selected the #1 for this season.The last four times the number 1 was used in the MotoGP class:- Stoner 2012- Lorenzo 2011- Stoner 2008- Hayden 2007 #MotoGP aRaDz3T4Ba— MotoGP (@_motogp) January 20, 2023