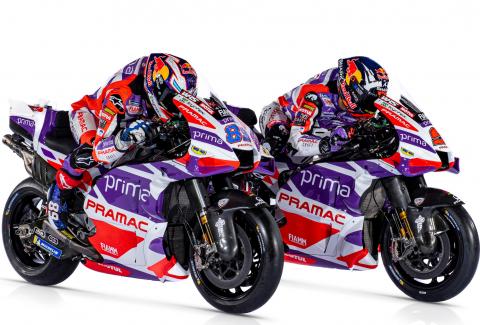 After two seasons without a title sponsor, Insurance agency Prima joined Pramac from Mugello last year, resulting in purple taking over from red as the dominant colour on the team’s Desmosedicis.The amount of purple on the lower part of the bike has been reduced for the 2023 livery, unveiled by continuing team-mates Zarco and Martin on Wednesday, alongside the traditional Pramac red and white.Pecco Bagnaia & Ducati will use NUMBER 1 in 2023! | MotoGP 2023Video of Pecco Bagnaia & Ducati will use NUMBER 1 in 2023! | MotoGP 2023Ex-Suzuki technical boss Ken Kawauchi settles in at Honda, Rins ‘very happy’Sprint races ‘will change the championship’, ‘have to be smart’Bastianini: Favourites? ’Marc is Marc’, Bagnaia: ‘It’s like a schoolPramac was again the top satellite squad last season, courtesy of fourth in the teams’ championship.However, Johann Zarco slipped from fifth to eighth in the riders’ standings while Jorge Martin was unable to repeat his race-winning heroics as a 2021 rookie on the way to ninth.Nevertheless, Zarco and Martin stood on the podium four times each and, with Enea Bastianini picked in favour of Martin for the factory ride, remain at Pramac on the latest Desmosedici machinery for the third season in a row. Zarco, who at 32 is now one of the oldest on the grid, will continue his quest for a debut MotoGP victory after finishing runner-up on no less than ten occasions.Other near misses include falling from the lead at Silverstone last season and opting not to risk contact with Francesco Bagnaia in the closing stages of the wet Buriram race.Martin will again seek to turn his raw speed (nine poles from 34 starts) into consistency as, like Zarco, he tries to become the first satellite rider to win the ‘MotoGP’ crown.Related Australian MotoGP: Zarco dominates day one at Phillip Island Johann Zarco: I almost hit Enea and had to go straightHaving been overlooked by the official Ducati team, set to run Bagnaia and Bastianini for the next two seasons, Martin is seen as a possible contender for the available factory Yamaha ride, alongside Fabio Quartararo, for 2024.Meanwhile, with long-time team manager Francesco Guidotti poached by KTM at the end of 2021, Gino Borsoi has been hired from Aspar to take over the reins at Pramac in 2023.