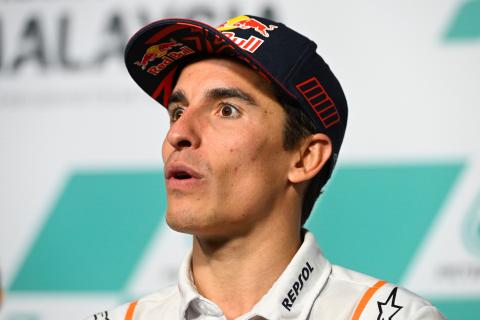 The scars on Marc Márquez’s right arm #MotoGP DlKvoduj19— MotoGP (@_motogp) January 22, 2023    View this post on Instagram           A post shared by Marc Márquez (@marcmarquez93)Marquez missed six races in the middle of the 2022 MotoGP season to undergo a fourth major arm surgery, the most serious yet, which threatened his career.It has left him with horrific scars all over his right arm.The operation was needed to rotate his bone by 30 degrees, to fix ongoing issues caused by ing on track.The six-time MotoGP champion returned at the back end of last year, somehow scoring a pole position and a podium finish when the expectation was that he was still regaining fitness.”You don’t want to ride again” – Marc Marquez talks about his Mandalika | MotoGP 2023Video of "You don't want to ride again" – Marc Marquez talks about his Mandalika | MotoGP 2023Despite a sub-par Repsol Honda bike which Marquez has demanded must improve for 2023, he is ramping up his physical output in preparation for the new season.His new photos show Marquez in the gym undergoing a gruelling training regime to rehabilitate his arm.Related Has Ducati’s stance on signing Marc Marquez changed? Valentino Rossi recalls Marquez-Lorenzo drama: “I deserved a 10th title”He has previously said: “I don’t know what my 100% is on my right arm. Of course, it won’t be like my left arm. It is an arm that they have opened up four times!“I have had four different surgeries so it isn’t a normal arm.“This winter, I need to understand what the maximum for that arm is.“I believe, still, that I can grow a lot.”