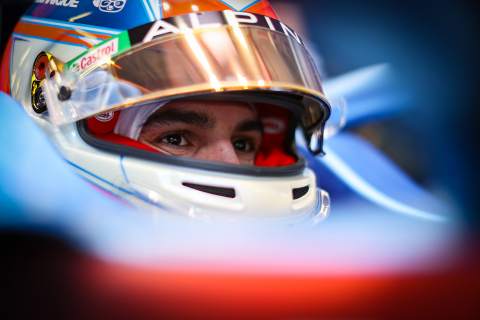 The friendly Frenchman is a delightful member of the F1 paddock off the track, and on it he is fiercely competitive. A string of superb performances across the 2021 season have underlined the star potential that at one stage convinced Mercedes to take Ocon under its wing. While a Mercedes shot has never quite materialised for Ocon, he found himself a new-yet-familiar home following a year on the F1 sidelines by returning to the Enstone-based squad who were long-term backers of his junior career. Following a difficult start to his comeback year alongside Daniel Ricciardo at Renault in 2020, Ocon made impressive strides as the season progressed and capped off the campaign with a brilliant podium at the Sakhir Grand Prix. That proved to be a pivotal turning point for Ocon, who has been able to carry that confidence and momentum into 2021. More often than not he has outperformed his two-time world champion teammate Fernando Alonso despite currently sitting behind the experienced Spaniard in the standings. Related ArticlesaccImages.createImage(); Mercedes forced to postpone Grosjean’s F1 farewell test at Paul RicardaccImages.createImage(); Mercedes forced to postpone Grosjean’s F1 farewell test at Paul RicardIt is little surprise then that Alpine has secured Ocon’s services for the long-term by offering him a bumper contract extension. The deal, which was announced by Alpine on the eve of his and the team’s home race, the French Grand Prix at Paul Ricard, will see Ocon remain at Enstone until at least the end of 2024. Related ArticlesaccImages.createImage(); Esteban Ocon signs three-year F1 contract extension with AlpineaccImages.createImage(); McLaren target improved qualifying in bid to reclaim P3 from F1 rivals FerrariIt is just reward for an outstanding season to date, with Ocon recording four top-10 appearances in the five races he has finished so far, as well as regularly outpacing Alonso in qualifying. The move is a no-brainer decision for both parties. 2780529.0064.jpg accImages.createImage();Alpine has tied down a driver who continues to improve and has plenty of untapped potential for its mid-to-long-term project, while it provides Ocon with stability and security heading into F1’s new era in 2022 and beyond. “I’m delighted to continue with the team beyond this year and it’s a fantastic feeling to secure my future with Alpine,” said Ocon. “We’ve been progressing well together since I joined the team and I aim to continue that journey going forward. “4“There are great challenges ahead of us, especially with the new regulations in 2022. I’m sure we can hit our targets by working hard together and continuing the story. “I often think back to the Sakhir Grand Prix last year with the podium, and it motivates me to create more special memories like that. I’m really looking forward to the next chapter but, for now, we’re very much focused on this season and taking each race as it comes.”The fact Ocon is French is an added bonus that makes the marriage perfect from Alpine’s perspective. “5With the only other Frenchman on the F1 grid – AlphaTauri’s race-winning Pierre Gasly – seemingly unavailable, Ocon represents an excellent ambassador to promote the Alpine brand. That is not to rule out a move for Gasly in the future to form an all-French dream team, given that at 39, Alonso is unlikely to hang around for more than a few years. After all, the 2022 rules revolution and a shot at returning to winning ways was always the main focus and inspiration for Alonso’s return. jm2105ju181.jpg accImages.createImage();Staying in the present, Ocon is a hugely popular figure at Alpine and is regarded extremely highly by the hierarchy at the Anglo-French outfit. It will rightly feel delighted to have tied down a driver who has shown promising signs of emerging as a top F1 talent. Ocon’s renewal highlights the strong faith and belief that Alpine has in him. “We are very proud to retain Esteban as part of the Alpine family,” said Alpine CEO Laurent Rossi. “Since returning to the team in 2020, Esteban has grown in confidence and stature to deliver consistently good results and help develop the car with the team. “6”Despite his young age, he is very experienced in Formula 1 and he’s on a positive trajectory in both his maturity and ability behind the wheel. He is a strong asset for us now, and also going forward as we meet the challenge of the new regulations. “We have every confidence in Esteban to help drive the team and the brand to the next level and meet its long-term objectives. Esteban is an asset for us beyond F1 as he is deeply involved in the Alpine global project. “Thanks to his personality and values, Esteban is naturally a perfect ambassador of Alpine.” “7While his 2021 performances have certainly warranted talk of Ocon earning a top drive with Mercedes, in reality, he was only ever an outside bet for 2022. Having usurped Ocon as Mercedes’ latest protege, current Williams driver George Russell appears to be in pole position for a promotion to replace Valtteri Bottas and become Lewis Hamilton’s next teammate, with rumours pointing to an announcement as early as next month’s British Grand Prix. Should Ocon continue to shine in the coming years then the Mercedes door could always reopen, but for the time being at least, he is committed to Alpine. “8And right now, it is the perfect place for him. jm2104ju568.jpg accImages.createImage();