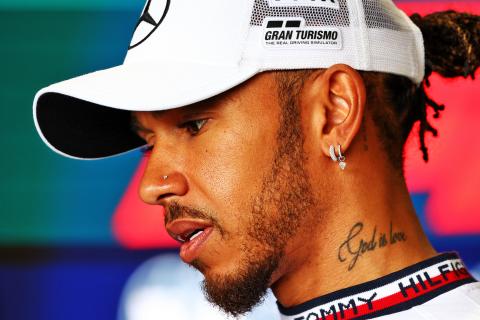 
Hamilton is F1’s most successful driver in terms of statistics, with the most grand prix victories, pole positions and podiums.He’s currently level with Michael Schumacher on seven titles apiece, eying a record-breaking eighth in F1 2023.Michael Schumacher vs Lewis Hamilton: The never-ending debate?Video of Michael Schumacher vs Lewis Hamilton: The never-ending debate?At 38, Hamilton is the second-oldest driver on the F1 grid after Fernando Alonso, but he still remains amongst the best around.It’s not always been plain-sailing for Hamilton, who has recounted the racist abuse and bullying he endured during his childhood, while his father, Anthony Hamilton, was forced to take on multiple jobs to fund his karting career.’There will be a big hole’ – Hamilton’s one fear about F1 careerHamilton was asked during the On Purpose podcast by Jay Shetty, to pick out the best and worst pieces of advice he’d heard during his long career in motorsport.“My dad: ‘Never give up’,” he said “That has been in the back of my mind every single day.The other one? ‘You will always be learning’ is what I learned from Nelson Mandela.He said: ‘I am 90 and I’m still learning today, you will always learn something new and grow’.Related Explained: The $20 billion F1 vs FIA bust-up “A crisis” – Veteran F1 steward criticises FIA for alternating race directors“When I was younger, the parents of other racing drivers. One guy said: ‘Give up, you just don’t have it!’ A grown man in his 40s or 50s. I was eight! He told me to my face! I thought: ‘What do you mean?’I would imagine [he said it] because I was beating his kid.Teachers said: ‘You will never amount to anything’. It broke me down so much.” Hamilton met Mandela – a key figure in South Africa’s anti-apartheid movement before becoming the country’s first black president – during his first title-winning year in 2008 as part of Mandela’s 90th birthday celebrations.“Nelson Mandela is one of my biggest inspirations,” he added. I was fortunate to meet him aged 23. “It was mind-blowing. I walked in and met him. It was like walking to god or a king! You could see his aura. His smile was beaming. That was the most impactful day for me, as a youngster.“I got to F1 and had success – you dream of being a racing driver but you don’t dream of other things, like meeting incredible people. I went to Mandela’s 90th birthday in London. I was sat on his table! Bill Clinton was there, Denzel Washington, Oprah Winfrey was next to me.“Then you discover they are just human beings with feelings, emotions and their own challenges. I was so young at the time. I don’t even recognise myself when I look back to seven years ago. Now, I know myself more.”